We interviewed Pierre Catholix, member of one of the best current garage bands on the alternative scene, Catholic Spray. But this French doesn´t comply with having only a band, he prefers 4 o 5. One of this bands is La Secte Du Futur, about what we have asked too. This guy is an example of hyperactivity. 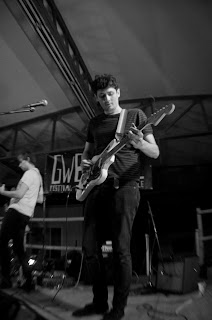 Well, first of all, maybe not everyone who reads this interview knows about Catholic Spray, so could you tell us how and when the band was started up?.

We can say that the band has been existing since June 2010. We were all playing in different bands at this time but we always went at gigs organized by our friends of Inch Allah label, so that's where we met.

Maybe we can say that since the appearance of Black Lips, among other bands, the American scene, as well as the European one, has been filled with great garage bands, such as yours, what do you think about this boom on garage music?.

I guess it's often dangerous when any boom is happening, but whatever, if garage music means to record a bunch of songs in your bedroom through cheap stuff, then it can't be bad that a lot of dudes start to make it.

In the case of France, there is an important emerging wave of garage bands and with some of them, you share the record label. What is your opinion about these other bands?.

We don't know all of them but a bunch are friends of us, we especially enjoy to play with Crash Normal, JC Satàn, Yussuf Jerusalem for example, or White Ass which is a brand new one with members of Pierre & Bastien and Teenage Moonlight Bordeliners, you really should take a listen to this one, it kicks ass. It's cool France scene can be appreciated, it makes things easier to tour through foreign countries.

Great! I take note about some bands that I didn't know.
In 2011, you released your first album, Amazon Hunt, but we found some songs that were already known such as: "Ghost from my grave" or "Waiting for the sun".Why did you decide to rescue some of the old songs from Fruits Of The Moon and include them in the album?.


Well, our debut album is kind of a compilation of our first recording sessions. We mixed three different ones and then we wanted to have some from Fruits of the Moon, what has been only released through split tapes. We thought people who would buy the 12" perhaps didn't know the split tape with Zyklon Beach. Our second album that we've just started to record will be only composed of brand new tracks.

We just mentioned a split for which you collaborated with Zyklon Beach. Are you planning any more collaborations? Who would you most like to work with?.

We'd be okay to collaborate with a lot of bands, that's always a good way to have a new release. Since a fucked up party we had with JC Satàn, we have some good reasons to make a split with them, hope sooner or later. We all got stoked when we saw the Rent Boys from Leeds, that's an awesome band we'd be happy to work with too.

We'd love to see a collaboration between JC Satàn and you!
Side projects are something which you obviously know about, but how do you actually set about playing with Catholic Spray along with other bands such as La Secte Du Futur?.

From my point, it's pretty much the same process, I try to compose one track, then I share it with either one band or the other. Within Catholic Spray we have more a team process cause every member is making his own composition, but anyway we could all be making music all day long. Some of us are involved in about 4 or 5 bands.

Especially one of the bands where you collaborate and get our attention is La Secte Du Futur and it´s precisely with this one that we find another sound, maybe more psychedelic and quiter than Catholic Spray, but keeping on the garage lo-fi style. Is that the genre where you feel more comfortable?.

I feel comfortable on the lo-fi style indeed, it's cool to record stuff on your bed. Actually, except the lyrics i'm doing almost the same composition with Catholic Spray, the thing that changes is that every other band mate adds his own touch and that turns the song into something maybe more nervous or trashy. La Secte Du Futur is more switching from pop songs to calm ones though you're right.

At La Secte Du Futur´s bandcamp we can find differents demos of what we suppose will be your next album. What plans do you have with this band?.

Our first plan is to flee the planned end of the world of course, we know the good people... But we're also recording our debut LP, songs from the bandcamp will most be on it but we're trying to make something less lo-fi this time. It must be released on our favourite Parisian label XVIII records, what has already released the Catholic Spray 7" split. We hope it'll be out this coming spring.

Maybe many people, including me, are wondering when we'll see you in a Europe tour with some of the groups that we have discussed...

We're going for a new euro tour with Catholic Spray, we do it with Fag Cop (Kansas City). We start on the 17th of February and we'll go through eastern and northern countries. Can't wait to see again people we met on our last euro tour.
We'd plan to play in Spain this summer, we have a couple of plans to go there and we have already some gigs booked here and there in France and close countries. Also maybe we'll tour a bit through Europe with La Secte du Futur in July. We're travellers.

We hope to see you! Finally, could you recommend some of the bands that you are listening to?