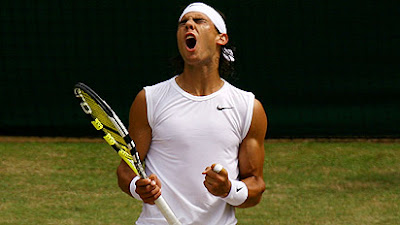 In a thrilling five-set Wimbledon championship match, Rafael Nadal evolved from king of clay to grass master, defeating Roger Federer 6-4, 6-4, 6-7 (5), 6-7 (8) 9-7. Nadal is the first player since Bjorn Borg in '80 to pull off the French Open-Wimbledon double.

In a week spain as a double achievemnet to celebrate , Euro 2008 champions and now Nadal victory over the champion Federer
Posted by Audiopleasures at 22:31