Benjamin Page is Rothko's electronics man. He records solo as Elite Barbarian and with his brother Tom, also in Rothko , as Rocketnumbernine.

" Music for me is a way to express the depth and emotion of life which, in this increasingly mundane and mediocre
modern society, is tragically overlooked. In music I look to hear and create that which connects directly with the Great Mystery, as the American Indians would say. Music which speaks to the soul but doesn't explain itself entirely...
I think that the pieces of music I have chosen here reflect that search, as does the music of Rothko. " 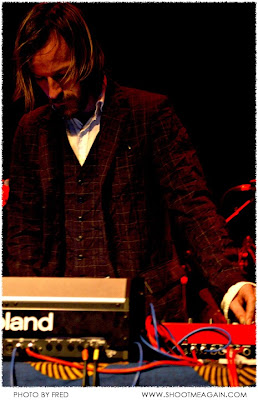 Philip Jeck - Fanfares [touch] I had the privilege of playing with Philip at Fear of Jazz, an evening I was promoting in London. His music is incredibly deep and intense and his dedication to his craft is an inspiration.

Robert Wyatt - Little Red Riding Hood Hit The Road [Hannibal Records] This from what is probably my
all-time favourite album, Rock Bottom. For me, this album has a unique, mysterious beauty and the production and musicianship are sublime. It's all the more incredible considering he wrote it whilst in hospital with a broken back...

Kate Bush - Under Ice [EMI] I grew up listening to Kate Bush and her music has been a huge influence on me.
I think she is a musical genius and her compositions are immense. I love the depth of emotion that she conveys...

Radiohead - Weird Fishes_Arpeggi [XL] This is a perfect song. Production, musicianship and emotion are faultless.
It really pulls at the heartstrings this one. I have alot of respect for this band.

Rothko - Roads Become Rivers [Lo Recordings] I've included this because it was released before I was a member of the band.
It's a wonderfully panoramic and expansive piece of music - classic Rothko...

Autechre - Vletrmx [Warp] This reminds me of driving through the beautiful wilds of Scotland and thinking, wow, i'd like to make music like that one day...

Fennesz - The Other Face [Touch] I've seen Christian Fennesz live quite a few times now and it's like he is harnessing the power of nature in digital form - a beautiful and overwhelming sound. Makes one see and feel the world in new ways...

Can - Sing Swan Song [Spoon] Started listening to Can when I was 19 and my whole world was turning upside down - it was like hearing the music I'd always wanted to hear but didn't know it exsisted. Can showed me it did...

Cliff Martinez - Is That What Everybody Wants? [Trauma (Red)] - I love the remake of Solaris and Cliff Martinez's score is special. A few tears shed listening and watching this...all the complexity and mystery of life right here...

One of the strongest electronic beep records you will ever hear, the new record from Elite Barbarian achieves a certain kind of ambience ordinarily/usually harboured by the most strung out and sensitive of electronic acts without using such barbed sonics.

Tickling like the insides of a ZX Spectrum and playing out like the soundtrack of several Atari 2600 games; over the course of 58 minutes the album takes the listener on a journey of unexplored confines electronic beats/beeps often coupled with crazed sick piano licks.

The author of the album is Ben Page who as a member of both Rothko and Rocket No.9 is a seasoned and accomplished composer of modern ambient extracts often emerging from improvisation and instinctive desires and trajectories.

The real strength of this record is the manner in which it achieves being both relentless and relaxed at the same time, tempered and tenacious in its brute meditation. As the atmospherics grow so does the intensity as sonic layers reminiscent of raindrops, pulses and bubbling machinery scour your consciousness almost feeling transient as it interrupts the flow of your immediate activities.

Listened to as a whole the album merges into one great body of work not strictly to be swallowed whole but to accompany any mindset or duty that requires a holding hand to assist concentration and clarity.

By the time it reaches the 16 minute climax “Let’s Go Back To Morse Code” you sense you are coming to the end of being subjected to some kind of subliminal intake and that it is actually quite possible that the beeps could well be pieced together Joe Bonham style to forge together some kind of alien message. You’re unlikely to hear this record at parties, only funerals. JGRAM - Diskant