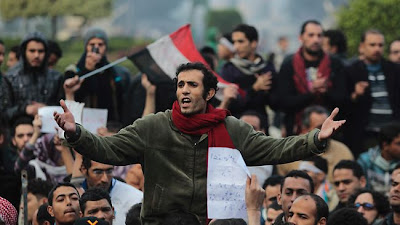 "I’m a British film maker but have been based in Cairo for the past 12 years and was in and around the centre during the first few days of the protests. Having spent so much time living here, I have a great love of Egypt and the Egyptians. As a foreign guest living in Egypt I generally try to steer clear of Egyptian politics. However, what has been happening in Tahrir is totally unprecedented. It’s amazing to see people making signs from anything lying around them in an attempt to get their voices heard." Full Story Here

Watch | Midan Tahrir Square on Feb 1 2011 by Oliver Wilkins
Posted by Audiopleasures at 22:12