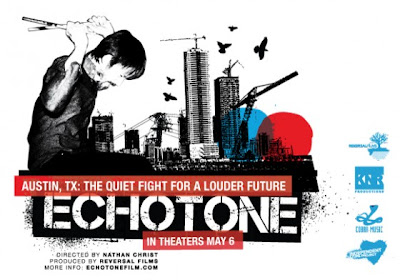 "Internationally known as 'The Live Music Capital of the World,' Austin's music culture has led it to become one of the world's most sought-after destinations. As nearly two dozen high-rises pop up throughout the city amidst economic downfall, how does the working musician get along? This lyrical documentary provides a telescopic view into the lives of Austin's vibrant young musicians as they grapple with questions of artistic integrity, commercialism, experimentation, and the future of their beloved city. Directed by Nathan Christ and photographed by Robert Garza, Echotone is a cultural portrait of the modern American city examined through the lyrics and lens of its creative class." ECHOTONE , FREE soundtrack.