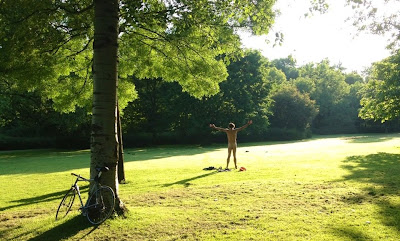 After "Bijous Bijous" birthday party it was so sunny in the morning that we decided to have a after party in the Westerpark in Amsterdam, few beers later this dude appears out of nowhere and starts taking his clothes off and screaming into the sun "Im so depressed", after a while the dude disappeared. On our way back home we heard a lady screaming for help, guess what the same dude wanted to kill himself but probably changed his mind and he was hanging on the canal bridge all naked, we help him out and told him to go home and sleep. picture by Vicent Teen