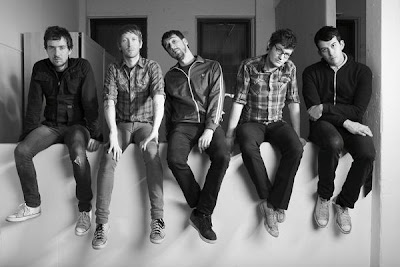 If we ever were to bust out of our jaded shells and dance (which is about as likely as our passing up a roadside Hardees), but not like 'all out' dance , just kind of like, you know, dance dance (see Juan Maclean or that Rapture band), these guys would be near the top of our DJ request list.

Look out for NYC's Foreign Islands. This excitable and ex-spazzable band has so far managed to stay pretty under-the-radar in this god forsaken town (though they did just open for The Hold Steady), but with a punk-with-synths staccato sound that can be described as Nation of Ulysses meets Les Savy Fav and Thunderbirds are Now!, well, how could they not be destined for greatness... or at least a Frenchkiss
record deal?

We've never kept it secret that we're a sucker for songs with hand claps, and, boy, do these guys ever bring out some powerful palms on stage. Go see them now, buy them a few beers, and in a few years you can say to those you want to impress, "No big deal, but I totally got wasted with Foreign Islands once." And they'll be all like, "Awesome." oh my rockness

Foreign Island
Posted by Audiopleasures at 12:22