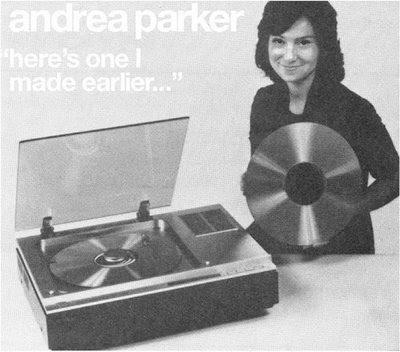 "Here's One I Made Earlier is a fine collection of productions from Andrea Parker, recognised as one of the world's leading female electronic artists alongside Ellen Allien and Miss Kittin. The album showcases her keen ear for haunting melody, abstract rhythms, found sounds and subtle atmospheres. Predominantly recorded alongside her long time studio partner, David Morley, this collection of inspirational electronics unveils long deleted and rare lost gems from the vaults of such esteemed labels as K7!, R&S, Infonet and Quatermass. Known for her dark, experimental sets and sublime productions, Parker has pioneered sonic abstraction and electronic beats for some fifteen years now -- 'the grandma of electro!' An avid enthusiast of classic analog synthesizers and drum machines such as the Arp, Serge, Buchla, Fairlights and of course the 808, she chooses them over the current fashion for software. Early on she collaborated on some electronic adventures as Inky Blacknuss (with Alex Knight) producing timeless gems like 'Blacknuss.' Then formed 'Two Sandwiches Short Of A Lunchbox' with David Morley on Apollo/R&S and together they went on to produce the classic EP Angluar Art (Infonet) -- both of which can be heard on this new but old collection. In time she signed to Mo Wax, releasing the singles 'Melodius Thunk,' 'The Rocking Chair,' 'Ball Breaker,' and the full length album Kiss My Arp. Parker's productions have many emotions and sonic textures -- a fact not lost on the film and advertising fraternity who have used tracks from her output extensively. Their uses and users have been diverse, from a track on blockbuster movie Vanilla Sky where Tom Cruise is dancing to 'Too Good To Be Strange' and Patrick Moore's 'Sky At Night' to a documentary on NASA and a mugging crime re-enactment on Richard & Judy." forcedexposure

Post Credit its coming out of your speaker
Posted by Audiopleasures at 00:43