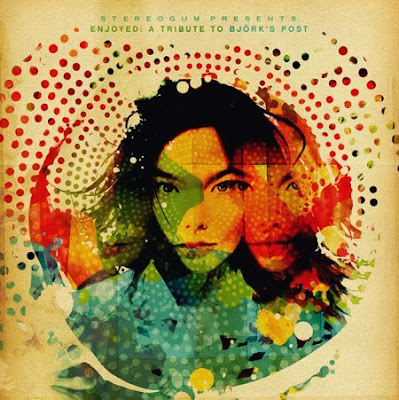 After completing and launching Drive XV, our tribute to R.E.M.'s Automatic For The People, we gathered at 11th St Bar one night to figure out which album we should tackle next. OKX, our inaugural step into the compilation world, had been a no-brainer: 2007 was OK Computer's 10th Anniversary, and we wanted to honor the milestone. This time, though, when we started off thinking of possibilities based on release dates -- Drive XV was celebrating 15 years of Automatic after all -- nothing seemed quite right. (We've already discussed our decision not to go with the recently 10-year-old In The Aeroplane Over The Sea, for instance.)

After discarding our release-date almanac, someone suggested Björk. It was late, and we don't remember who said what, but it was a great idea. Debut, her first post-Sugarcubes album came out in 1993, which could count for a nice and even 15 years in 2008, but Post was the obvious choice: It's a stronger album top to bottom -- a culmination of her work to that point. It includes any number of iconic tracks and due to the richness and variety of Björk's self-described "spastic" palette, an infinite number of interpretive possibilities. Think, for example, of "It's Oh So Quiet," Björk's big-band cover of Betty Hutton's "Blow a Fuse," the almost industrial noise of "Army Of Me," the wispy, avant ambiance of "Cover Me," etc. When we spoke with Björk about her thoughts on Post, our choice seemed even more appropriate.


I listened to it when we did the surround mixes of it like two or three years ago [Note: Post was re-released in 2006 with surround sound mixes] and I have to say I was kinda surprised how the odd spastic thing of the album had actually aged well. I was very aware of it at the time that I needed to be musically promiscuous and have almost every song [a] different mood/style and so on. The picture on the cover is me on Piccadilly Circus (Times Square of London) too excited, too many things, Bright Lights Big City kinda thing, and me eager to consume. So my musical heart was scattered at the time and I wanted the album to show that.

We also asked the contributors for their thoughts on Post. Accordingly, each track has its own page with the artist's statement, as well as a dedicated comment section, so please click around.

Completing Enjoyed took a number of hands and plenty of elbow grease. We are deeply thankful to Björk for taking time out of her tour to answer our questions and offering commentary. Þakka þér kærlega, Björk! We'd also like to thank to Scott Hansen for his gorgeous album art, Phillip Klum for the absolutely amazing job mastering the project, the video team of Jon McMillan/Matt Neatock/Raphael Rodriguez/Shea Hess for shooting the band interviews, everyone at Sacks & Co., and Haukur S. Magnússon for help with our Icelandic. Finally, a major major thank you to all the bands for their participation -- folks juggled hectic tour and personal schedules and managed to get us amazing interpretations of Björk's originals. All is much appreciated.

As you may have noticed, this is our first compilation without Roman Numerals in the the title: We took the name from track "Enjoy." Of course, we also get the possible plays on "Post." We are bloggers, after all. Stereogum

Bjork
Stereogum
Posted by Audiopleasures at 16:52