The key to how Fuck Buttons pull this off lies in their creative origins: Brits Andrew Hung and Benjamin John Power formed the group in 2004 with the goal of creating pain-inducing noise music, but soon became curious about mixing in prettier sounds, and adding structure and melody to their brutal tracks. Still, they never lost the aggression and abstraction of their noise leanings: They're not afraid to let a beat pound forever, or let a drone wash slowly, or let a pedal loop endlessly. Where more traditional groups might worry that a part goes on too long, Fuck Buttons seem fascinated by what will happen if it does, riding it just past the point of expectation before hitting you with the next big switch-up. It's a trick that gives Street Horrrsing a sense of constant tension, with another surprise detonation always looming around the corner.

The album begins with "Sweet Love For Planet Earth", whose sparkly synths and pulsing drone bring to mind Gang Gang Dance's starry-eyed explorations. The patient power of that track courses through the rest of this seamless record. It's in the drum circles and chants of "Ribs Out", the chopping drift of "Okay, Let's Talk About Magic", and the blown-out metal vocals of "Race You To My Bedroom/Spirit Rise", which seem to make time melt away. Throughout, Fuck Buttons stick religiously to simple ideas, but mix them in surprising ways. When you expect a scream to burst forward, a synth figure slides in, or a bass rumbles up from the background. Still, the duo's signature is devout repetition. And by the time the loops of album closer "Colours Move" finally dissolve, Street Horrrsing has become one big loop itself-- an unbroken sonic circle. Pitchforkmedia - Marc Masters, March 17, 2008

Designed by Trollback + Company. A visual experiment where the graphics become the creator of the sounds rather than the reactive afterthought. The piece is set to "Moonlight in Glory," by David Byrne and Brian Eno 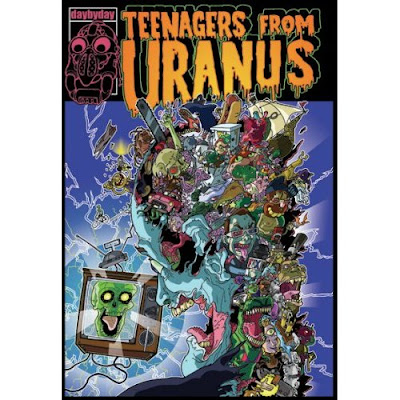 Far, far away on the Planet Uranus, an evil Lord reigns. All hell breaks loose when he sends two Teenagers from Uranus to take control of the media airwaves in attempt to destroy the world. Written and created by Will Carsola and Dave Stewart, a twisted sketch comedy movie guaranteed to blow your head off. With the gore version of Municipal Wastes "Unleash the Bastards" video. Graffiti with Serf, Mint, Resk, Dr.sex, Mad, Rate, Goal, Host, Tenz, Lions, and more. Featuring the new hair bling, singing hobos, dmv drivers license pranks, rapping Jesus, Dr.Phil as a serial killer and other relentless parodies.

"This movie takes all that sucks on television and farts in its mouth"
-famous person.