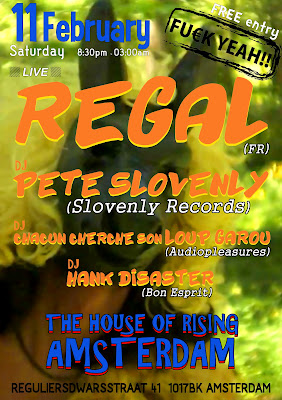 After the supa sick new years eve houseparty in Amsterdam with Strange Hands and Le Pecheur Audiopleasures is back on the parteeee zone, this time with the help of some friends were having the wonderful garage rockers Regal live and Slovenly records boss Peter Slovenly on the decks plus Audiopleasures and Bon Esprit dj's @ The House of Rising for FREE !!!!!

DJ PETE SLOVENLY ( Slovenly Records )
Another excuse to celebrate 10 years of Slovenly Recordings! Pete Slovenly (aka Sticker Guy) will be playin some rekkids'!


"Regal, French band formed in Lyon by ex members of Last Rapes of Mr Teach and current members of Le Pêcheur.
The four youngsters from Regal, who look like they just came out of a book by Jack Kerouac, play Garage music.
Their primal influences are definitely rooted in the sixties, Back From The Grave and Garage Punk Unknowns compilation series come to mind first, but Regal is far from being a Revival Garage band.
The guys have been listening to the Black Lips a lot, that's for sure, and two of the twelve tracks on this LP are nice Folk or Americana songs on which acoustic guitar meets Irish fiddle. Not really surprising when you know that Regal's main singer, Caelan O'Flaherty, also playing the guitar in the band, is of Irish origins.
Certain tracks on "Possible Endings" might lead us to fields freshly cultivated by bands like the Indian Wars but the four black sheeps from Regal still feast on that good old grass originally planted by the Seeds and then cultivated by the Black Lips or the Weakends (...and a sip of red wine!).
Twelve "home-recorded" tracks on a nice piece of wax, artwork by Antoine, Regal's drummer, and co-produced with AzBin Records, brand-new record label created by Xavier, the other guitar in the band (who was the drummer in Last Rapes)."
Posted by Audiopleasures at 18:52