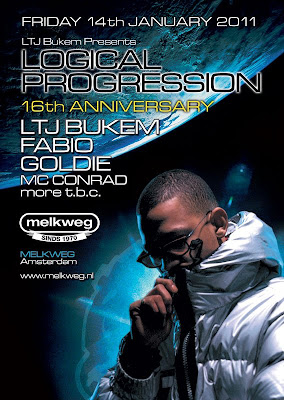 Hell Yeah !!!! gonna hang out with my Drum N Bass budies next friday on this mega party next friday in the Melkweg Amsterdam

"From 1995 LTJ Bukem and the Logical movement have constantly pushed drum&bass into a new galaxy of sound, combining chilled atmospherics, sultry strings and crisp basslines. Logical Progression’s conception came from the passion and belief that a unique musical voice needed an uninhibited platform to express itself from.

On January 14th 2011, Melkweg Amsterdam is that platform, as LTJ Bukem returns for an installment of the infamous Logical Progression club night. During the mid nineties Melkweg was the first club in the Netherlands to host drum&bass nights, where young LTJ Bukem made his first appearance in 1996. Now almost 16 years later it is time to look back. The second overseas edition of Logical Progression offers a selection of celebrated DJs, all of whom have inspired or influenced LTJ Bukem himself, in a master class of drum&bass featuring the best music from 1994 till 1998. "
Posted by Audiopleasures at 21:20