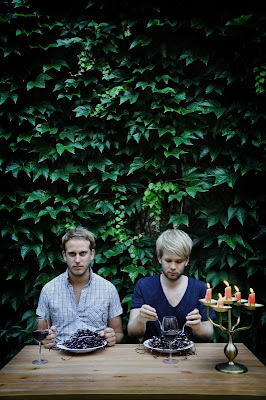 Audiopleasures favorite Electro-Bangers from Switzerland "We Love Machines" are set to release their debut Album, "Short Circuit" release party will be on the 1st of April in the Wasserwerk Club, Bern

But before the guys are coming to Amsterdam to play a live gig for the next party joining Audiopleasures and Bon Esprit Asociaal 4 , 18 March at the Winston together with our friends Leonardo Quelhas, Agnesa Roda, Marcia and Hank Disaster

We Love Machines have been very busy playing their amazing live set and have been feature next to awesome people like The Bloody Beetroots, Yuksek, The Lowbrows, Pitchtuner, Haezer and after the Amsterdam gig they are going back to Switzerland to play with Leeroy Thornhill (Prodigy), Smash HiFi (UK/DE), Haezer (SA) and Marten Horger (DE)

We are Daniel and Timo.
We are from Switzerland.
We played in rock bands.
We studied music.
We got bored.
We went to clubs.
We got bored again.
We started producing.
We went to clubs again.
We were on stage.
We did not get bored.
We made an album.
We called it "Short Circuit".
We will release it on the 01.04.11.
We will celebrate a big release party.
We invite you to celebrate with us.
We Love You.
We Love Machines.
Posted by Audiopleasures at 22:22