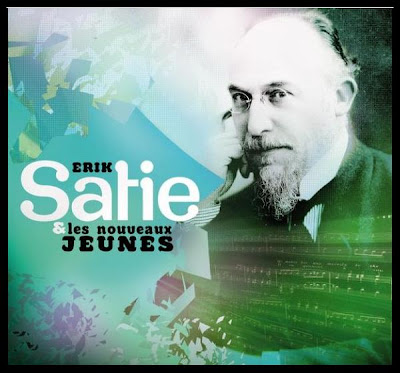 "It was expected that arbouse Recordings label, party over ten years the discovery through the world of music news, come to look to Erik Satie this precursor. As such, Cyril Caucat (label founder) approached Ornella Volta Chair of Archives Erik Satie (Paris). Since 2000 took place between Paris and Rodez an exchange of letters that eventually leads to disc as a tribute to composer. 'Les nouveaux jeunes' from all corners of the world (Chicago, New York Stockholm Berlin, London, Paris ...) will be heard through their music of Erik Satie news .. . Without forget the other side of modernity: its humor seriously. It was actually 'Esoterik' provided that 'Satierik'. Just to play with Satie recordings arbutus appealed to Illegal, a organization dark and full of mockery in the words of a journalist.
"Erik Satie et les nouveaux jeunes" is a disc-shaped tribute to composer Erik Satie (formerly pressure "les nouveaux jeunes" is Erik Satie used for these contemporaries such as Darius Milhaud, Francis Poulenc (school's of six). A number of international musicians today were asked to rework directory Satie, propose designs or re-interpretations." Arbouse Recordings