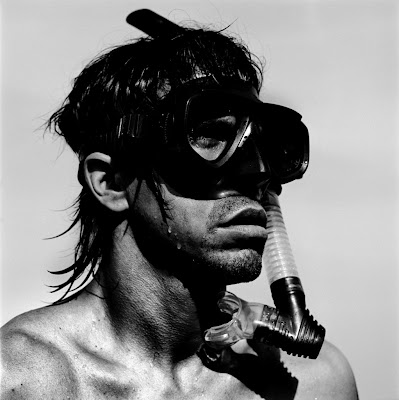 Corbijn's love for the musical and creative spirit is already well known. Collaborating on a short film (Some YoYo Stuff, 1993) with artist Don van Vliet - also known as Captain Beefheart - made his appreciation for the painter clear. This probably also had to do with the fact that his grandfather was a painter. The project strippinggirls which he produced with Marlene Dumas in 2000 also had an influence on his interest in the painter.

Anton Corbijn is interested in how artists struggle with the creative process: the pain and the drama of the act of creation. His monumental black-and-white portraits blend austerity and aesthetics and attract attention because of the deliberate and exacting way they capture the character of the person being portrayed. The work shows Corbijn's concentrated gaze, his feeling for wonder and his ability to empathize with another." Foam
Posted by Audiopleasures at 14:55