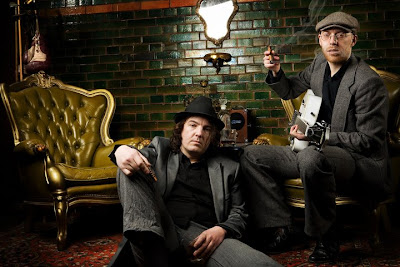 The Pignose Willy's are as they like to call themselves "The dirty blues duo from the streets of Haarlem" and better know among the music community as Joost and Pieter two old friends that have been playing together for many years and now bring this blues rock n roll boogie awesomeness straight from the great Mississippi delta blues.

I've seem them live in the beginning of the year and i was stunt but not surprised because these boys background is just immaculate, Pieter glides his electric harmonica with swinging distortion while Joost plays guitar bangs on the drum and sings with is already famous raw voice and monster stage presence, simply contagious !!!!

They are going to release their first 7" on the upcoming Sleazefest on the 15 of July in Amsterdam and next Saturday stop on the super cool De Nieuw Anita .