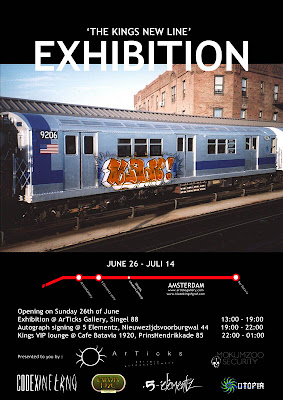 "Starting at ArTicks Gallery with the exhibition of Blade's newest collection of artworks on canvas. Afterwards, at the 5-Elementz. In a TV Talk Show setting with host Kev Visser aka Dirk Richard Tinus and the king himself, Steven Ogburn, will discuss the 70’s NYC graffiti scene and the old ‘lines’ of the New York City Subway lines that he use to rule. '70s funk music provided by DJ Nekst. After an autograph signing and meeting opportunity, the last part of the trilogy will take place at Cafe Batavia 1920 where the king and subjects can feast on NYC style hotdogs, pizza and drinks in the presence of The King of Graffiti with additional artworks done by the Codex Inferno Art Collective. 70's/80's Funk/Soul and HipHop by DJ Turne.

Steven Ogburn started his career as a successful artist during the early '70s in New York City where he painted thousands of subway trains. Since then he has shown his artwork at many international exhibitions. During 1994 Steven was exhibited at the Groninger Museum where he was introduced to Queen Beatrix. His canvases have also appeared at the Stedelijk Museum, MOCA Los Angeles and Sotheby’s."
Posted by Audiopleasures at 21:21