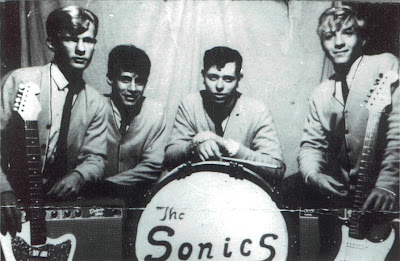 "Of all the garage bands that made a glorious racket in the 1960s, few if any were louder, wilder, or more raw than the Sonics, a Tacoma, WA quintet whose over-the-top style, complete with roaring guitars, pounding drums, and the fevered howls of lead singer Gerry Roslie, anticipated the mania of punk and pushed rock & roll deep into the red zone during their 1963-1966 heyday. The Sonics were stars in Washington, but it took a while for the rest of the world to catch on, and in time they would become one of the most fabled bands on the Pacific Northwest rock scene." Vh1