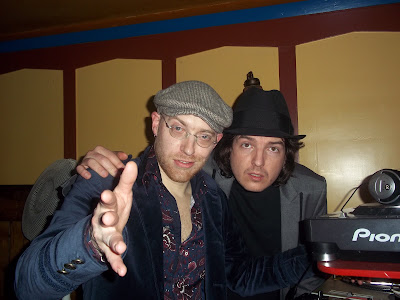 Joost Varkevisser and Pieter Kamp have many faces and even more names, they are part of the infamous gang from Club Tarantula that gave Haarlem so many memorable nights like the closing from the Cinema Palace one of the best events in the whole year, they are in my humble opinion the best new band in Holland in 2011 The Pignose Willy's, are the kick ass Djs Pietertje Pep and Gijsbert Versgemalen and are the personification of real love for the Rock n Roll, Blues cause and they do it with class and passion ... my kind of people.

Few weeks ago i received a invitation to vote from them in the election for Nachtburgermeester or Night Mayors of Haarlem, generally speaking i always sign under for anything they are involved without asking but this time decided to ask.

What is exactly the Nachtburgermeester function ?

P. PEP & G. VERSGEMALEN – Lets just say that the Nachtburgermeester is more of an inspirational role, someone who is active in creating a vibrant and vivid night life in a city. As for advising or decision making it all depends on the person who holds the “position”. I think an ideal Nachtburgermeester is already active and will continue to play a visible role in instigating events, gathering, parties in Haarlem at night.

Why have you guys decided to be candidates and what are you planning to achieve ?

P. PEP & G. VERSGEMALEN - Joost and I decided to do it just for good old fun. We think a Nightmayor should not necessarily be chosen by voting via Facebook or by running a hard boiled campaign. In one way we wanted to join in just to show how silly this all can be. This is obvious if you have read our “campaign” info. We even selected some friends and asked them to act as our "Wethouders". These are people that because of the roles they have played in the Haarlem night life/cultural scene, we think are even more entitled to the title of Nachtburgermeester then us. At least that is what we think. We think that this combination of people can put together some wild nights in Haarlem. On the other hand we do take the idea serious. The Haarlem nightlife needs a little kick in the ass.


Haarlem is the capital of North Holland and there is no night train. Every year there's talks and petitions but nothing seem to have any effect at all on changing this. Why is this happening? Is this something you guys can lobby about? Don't you think this would be of a great capital importance to the city ?

P. PEP & G. VERSGEMALEN - This is indeed a problem. We would love to see a night train finally come into being for Haarlem. But we are not necessarily going to lobby for this if we are chosen. This is a very old problem and people have been trying to change this for years. What we think is of greater importance is to focus on the nightlife happening in Haarlem. A night train between Haarlem and Amsterdam would be ideal, but we want people to stay and party in Haarlem, not necessarily flee to Amsterdam. We understand why people do. We want to make things happen hear. What we would rather see is a more vibrant student life in Haarlem. If only Haarlem had a broader academic spectrum, with an art school or something that would attract the working student to live in and go out in Haarlem, we think this would give the nightlife a real boost. The creation of a local platform where people can talk and share there feeling and about the Haarlem nightlife would be a good start. But these are very big plans and ideas, lets just start by throwing a great party!

You guys have a pretty dope rock n' roll background line up of people for your cabinet, is your team more focused on underground activities or will you also be focused on the more commercial aspects of nightlife activities ?

P. PEP & G. VERSGEMALEN - As for the cabinet that we have chosen, like I said earlier, these are the real night mayors of Haarlemtown in our eyes. These are some of the people making things happen in Haarlem right now. Even though we do have a love for the underground; we will not close our eyes for other initiatives or sub cultures. There is bar and a place for everybody in Haarlem. What a great fact is that in our humble little town. Just think of all the places that feature films, theatre and live music... all of these wonderful nightlife activities.

Nearby city's like Utrecht and Den Haag have outstanding festivals and events surrounding modern classical, cutting edge experimental electronic music, modern dance and Haarlem seems to be quite far off from this type of events. Is there a lack of interest in Haarlem for these types of events? If so, why do you think this? If not, do you think your team would be able to create or attract these types of events to Haarlem ?

P. PEP & G. VERSGEMALEN - Haarlem's has already some of the greatest events of it own. Just think of Haarlem Jazz, BevrijdingsPop, Haarlemse Heldenfestival, Stad als podium and many other local events.
Haarlem has a lot to offer. Haarlem is relatively small compared with Utrecht and Den Haag. These cities also have a larger student population as well. Out little town is not doing t bad. Much of it has to do with what people are aware of and the taking of their own initiative to check out what is happening in the city. Honestly there is always something going on. It just might not be exactly your thing.

Haarlem Philharmonic is a wonderful place but somehow quite exclusive that I've never been inside. Two years ago the Tindersticks played a concert there but the tickets were so ridiculously expensive that I missed it. Is there something that could be done, to have such a splendorous building more open, accessible and informal ?

P. PEP & G. VERSGEMALEN - Trying to change the ticket prices for performances is something a bit out of the Nachtburgermeesters control we think. It's up the venues themselves. Although we agree with your point that ticked prices are sometimes quite high. That is what happens when the city buildz these big places, the upkeep is very costly. Think of the ticket price as an investment in the place that we have to pay when we want to visit it. Though sometimes it does seem to us that the city planners of Haarlem thinks a bit to much of the city itself. What did they want to achieve by building these big expensive venues? Maybe they should have put some more thought in to who would be visiting them. On the other hand the city of Haarlem has the balls to try and see what happens.

I know for sure that when it comes to music you guys rock but what about Art in general, what's in your minds ?

P. PEP & G. VERSGEMALEN – If you mean, the role art plays in the nightlife? Wells some good friends of ours are very talented artists. We saw the need to include them in our perspective cabinet. These guys painted a wicked wall mural in the Patronaat during the Haalemse Helden event, and they organize art exhibitions and movie nights under the name Horizontal Vertical. Horizontal Vertical was also open as a venue during the Stad als P, featuring live music, Dj’s and an exhibition. With there inclusion in our cabinet we hope to incorporate an artistic viewpoint into the nightlife activities where it seems right. Yet, other times we all just want to run wild through the night and get down and dirty. The night for Pep & Versgemalen is open for all!

who can participate in this voting and how ?

P. PEP & G. VERSGEMALEN - if you live in Haarlem send your votes by email before the 4th of November to lijn1@kunstlijnhaarlem.nl