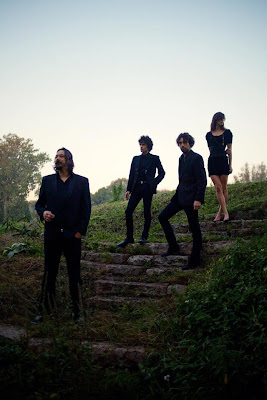 I've been hearing talks for quite some time about the new zZz formation with two more band mates but actually never heard anything, yesterday by pure randomness two facebook friends liked something called Light Light around the same time and because they are two guys known for their always excellent music choices had to investigate immediately. First visit on Light Light facebook page i could see on the profile picture Boris and Daan two of the most recognizable faces from the Amsterdam underground scene the mega cool punk-organ duo zZz one of the biggest and best Dutch gifts to the music world, unfortunately for my incredible bad luck missed probably the last two gigs in Amsterdam cause i was on holidays and that sucked hard time. zZz shows are some of the craziest wild things i've seen live and i sincerely miss seem them live but they've moved on and now im very curious to see there new band live. The only track available as Daan Schinkel organ all over it, Bjorn Ottenheim backing vocals and sounds like a pretty solid Indie song that will easy see the light of the charts with no problem at all but its to early to make any judgments so we gotta wait for more, about the other band dont know anything but from the info available are a Amsterdam sort of mellow freak folk so make the track "Guru" like a logical idea from what could be the result from this music Amsterdam merge.

The debut album is expected next year and in the meantime they have a bunch of shows already booked in Holland and in Paris next year.