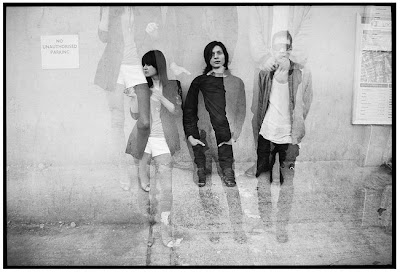 Megalicious album from HTRK (Hate Rock) originally from Melbourne but now relocated to London via Berlin.

Out on Ghostly Work (work, work)is a mindblowing claustrophobic minimal dark wave temptation that will haunt you down, its bizarre, hyper sensual and each song its just better than the one you heard before... David Lynch appears in your dreams slices your throat and looks at your eyes while you bleed to death while Ian Curtis writes a poem about it, a ritual of punishment in a forgotten cell a distant drumming and a women in silk leather laments longing words of smooth despair listening to Cocteau Twins on crack ... STUNNING !!!!!!!! 100% guaranteed to be one of the best this year and close to one band that i like a lot also Tropic Of Cancer.

If you are in LONDON tomorrow you are in a world of luck HTRK + Tropic Of Cancer @ The Garage
Posted by Audiopleasures at 02:08