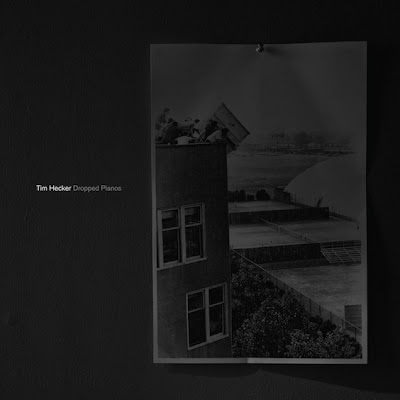 For this insanely and amazing music year have already some 5 albums lined up for best 2011 but Tim Hecker new album on Kranky "Dropped Pianos" is the ultimate MASTERPIECE and signs is name on the experimental electronic music genius altar with the likes of Vladislav Delay, Christian Fennesz, Richard Skelton and Ben Frost just to name a few.
One of the attributes that made me so drown to Tim Hecker music was the intensity, density and the magic invisible force field that pulls you straight inside to his drones that seems to be attached to powerful nuclear turbo boosters that makes every living creature or structure shake like the most imaginably violent tsunami all coordinated with echoed harmonic perfection.
I heard the phenomenal Ravedeath, 1972 that came out early in the year but for some reason wasn't really satisfied, like always i expect more and more.
With "Dropped Pianos" i was from the fist note overwhelmed with the simplicity and minimalism from the claustrophobic piano repetitive strokes with the sustained, sweeping drones and beautiful orchestrated microscopical glitchy orgasmic soundscapes that falls under the sub-logic perfect imperfections imaginary world of the abstract dripping Jackson Pollock masterpiece.
What makes "Dropped Pianos" epic, beyond and one of a kind is the perfect combination of Modern Classical, Drone, Noise and Glitch like was achieved by the Richard Skelton 2009 "Landings" but with the piano as main character in this story of music mutations and evolution.
Sketch 9 foggy and dizzy beginning that develops into a explosive and concentrated rocket fuel burst of a gigantic wave of rumbling reverb bass is probably the most powerful and overwhelming piece of music i heard since Ben Frost "Theory of Machines album track". Powerful, Simple, and Intense. GIGANTIC *****

Tim Hecker: Dropped Pianos by alteredzones
Posted by Audiopleasures at 20:04